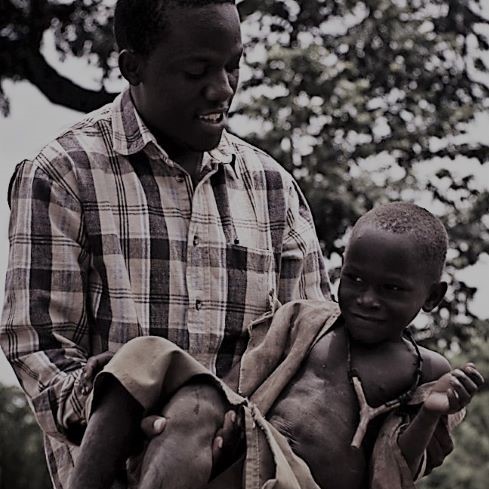 “Today it’s them, tomorrow its me. I shall not wait for my deathbed to help impact on lives globally. I shall do all I can today for a better tomorrow.”

Kasadha plays with a child in a former IDP Camp, Northern Uganda. (Photo by: Philimon Badagawa)

NORTHERN UGANDA REBORN THROUGH A LENS

Juma Kasadha recounts his experiences as a photographer and journalist in Northern Uganda in the aftermath of war.

Travelling through thick bushes into northern Uganda, I remembered how the natural beauty of the region had led Winston Churchill to describe it as the ‘Pearlof Africa’.

But as the saying goes, not all that glitters is gold. The beauty of Uganda had harbored Joseph Kony, leader of the notorious Lord’s Resistance Army, who had been indicted by the International Criminal Court. His actions against humanity left hundreds of people with amputated limbs, children orphaned, and thousands depending on humanitarian aid for their livelihood.  In the brutal war, many lives were lost, women and girls were abused, children were turned into soldiers, property was looted, and hope for a brighter tomorrow disappeared.

I saw the results of this conflict while visiting the region I once vowed never to reach. While those in the north had been fleeing gunshots to camps for Internally Displaced People (IDPs), I had been leading a life of comfort in Uganda’s capital of Kampala.

But the dancing, singing and style of dress of the people in the region created an unforgettable beauty. Seeing people move up and down in the streets of Gulu town, home to many refugees, meant that the war was over and the recovery was ongoing.

I was visiting as part of the Through a Lens campaign, supported by USAID’s Northern Uganda Transition Initiative, which aimed to change people’s perceptions about the afflicted region. As one of the fifteen photographers selected to work on the project, it gave me a chance to experience life in place in the heart of Africa known mainly for war.

Pages: Page 1, Page 2
Create your website at WordPress.com
Get started